According to our July survey of manufacturing leaders, optimism abounds with automation while skepticism hinders wearables and IIoT.

The way people talk about it, data can seem like a revolutionary notion. But data has always had value in manufacturing. You think Henry Ford wasn’t crunching numbers and keeping score as production of his Model T went from a takt time of 12 hours per unit to 2.5? Of course he was. The only thing that has changed is how vital this raw resource is to staying competitive in a post digital transformation landscape, where cutting-edge technology is slashing design, production and delivery times to a sliver of their previous state.

“Competitive” might be the wrong word. “Alive” is more like it. In the next decade, data—or rather, getting the most out of your data—could be the one thing keeping you in business.
Hopefully this isn’t taken as a warning, or even a revelation—it’s about as insightful as saying a human needs oxygen and food to live. But it could be a gentle reminder that change is coming fast, and according to our own data—collected via a survey conducted this past July—there are far too many technology procrastinators out there who are at risk of getting left behind.
Why is this happening? Well, we’ll just have to look at the data.

First, let’s look at the respondents. We received responses from more than 600 people and winnowed that down to 386 who currently identify as manufacturing leaders, from CEOs to R&D managers. About 82% were from North America, 7% from Asia and 5% from Europe. 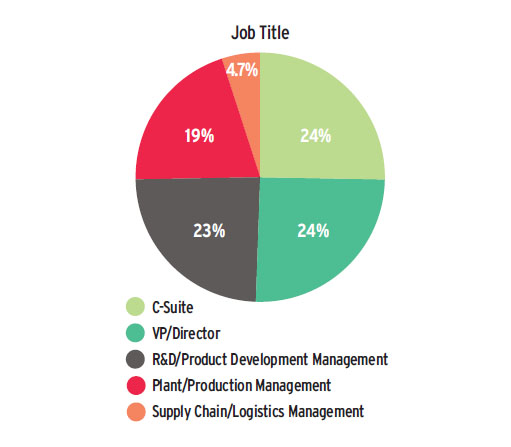 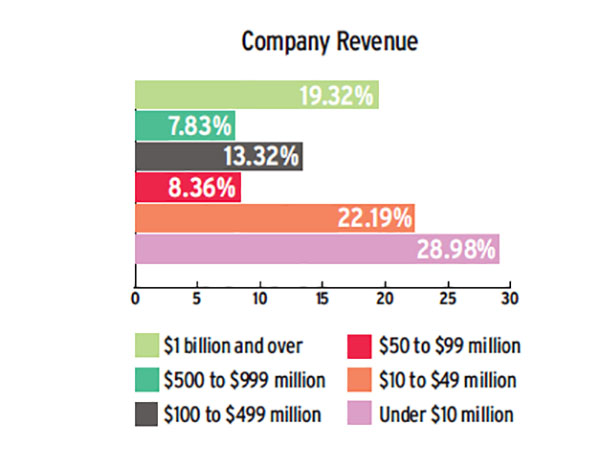 The most glaring difference among manufacturers based on revenue is their adoption of the Industrial Internet of Things. If data is the commodity, this is its supply chain. Look at how many more large enterprises have deployed IIoT versus small- to medium-sized enterprises: 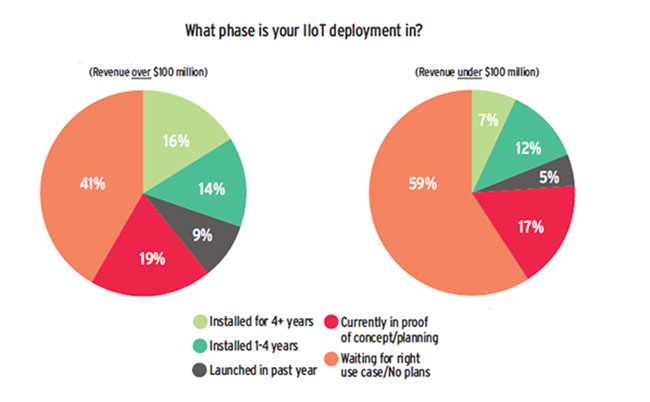 The results are not unexpected, as big companies likely have more employees and more money to throw at a deployment.

Due to this fundamental fact, SMEs must be more selective about their investments, says Juliane Stephan, a PwC consultant who specializes in smart factories and connected supply chains.

“It’s very crucial to make the right investment, because they usually don’t have as many funds available like large companies that they can just free up,” the digital ops expert says. “They focus more on the outcomes and specific use cases.”

The average SME is more risk averse, which is backed up by a 2016 study by scholar Ralf Peter Wüstermann. But the thing is, there doesn’t seem to be a lot of risk in deploying IIoT. Among the 30% of big businesses that have been running an IIoT application for at least a year, 15 times more said the project is meeting their expectations than not. With the under $100 million crowd, it was 12 times. Singling out the under $10 million group, not one respondent said the project was not meeting expectations.

Furthermore, I have been covering the IIoT in depth since 2015, and you don’t have to look hard to find willing partners and integrators to offer an affordable go-to-market plan. One issue is finding the right partners, explains Terri Foudray, CEO of Rumble, an IoT systems integrator.

“Unlike other technologies, it takes many partnerships and vendors to make a successful IoT deployment,” Foudray says. “There are thousands of vendors out there, and each vendor has a specialty that they deliver to the stack.”

The question then is, “How does one determine which vendors to use in each segment of the project?”

Foudray rattles off an exhaustive list of things to consider in this process, from assessing hardware issues such as sensors and edge devices to managing the data, from measuring anomalies to employing proper data science. If I were an SME leader and heard how involved it is, I, too, would have serious reservations about making the IIoT a priority.

On top of that, Foudray mentions 75% of IIoT projects fail, citing a 2017 Cisco survey. “People hearing about failure is part of the problem,” she says.

The SME aversion to the acronym IIoT was noticeable this year. Only 11.5% of respondents marked it as the most critical technology to their company’s success, behind both digital/additive manufacturing and automation/artificial intelligence. In 2018, 15% in the under-$100 million category said IIoT had the greatest potential to transform manufacturing.

That data point is a misleading, as the report itself does not suggest avoiding the IoT. After all, it takes failure to succeed, to learn from your mistakes and course-correct.

But if a product you make isn’t taking off like you’d expected, you don’t blame the customer. You think of a new way to make and/or market it.

“It’s difficult for the client or customer to adopt IoT right now the way it is being presented to them,” Foudray says. “As the vendors start to partner, and by doing so create more complete solutions, it will make it easier for the clients to adopt and the vendors will be more successful.”

That provides a little optimism for the future, but what about right now?

“We don’t use the word IoT a lot, because there’s only negative press around IoT,” says Bernhard Mehl, CEO at Kisi, a Brooklyn-based manufacturer of access control systems that works with cards and mobile devices. It absolutely is IoT-related. He says notorious hacks of major companies can help dissuade an IT manager from adding more potential attack surfaces.

He finds that companies often don’t have an official IoT strategy in place, but that, too, can be misleading.

“If you ask if they want their company more decentralized or if they plan to facilitate employee mobility between spaces, they would be the first to say yes,” Mehl says. “That only works if you run centrally and your devices are internet-connected.”

Mehl notes that in his operation, which assembles and packages the wall-mounted devices, collecting more data is an appealing prospect, and could provide more insight into failure rates and how many units are packaged versus produced. As a small company that just moved out of the Brooklyn Navy Yard hub of tech startups, Mehl says, Kisi likely will adopt more affordable ecommerce software for its inventory tracking and processing features.

With a few tweaks and some added hardware, even a ring scanner or two synched to the system, that would fit the definition of an IIoT deployment.
This humble solution also fits what Foudray would consider a great start for any manufacturer large or small: “You need the culture aligned and a clearly defined problem—know the business case and start small and not bite off too much.”

That’s an important thing to remember when you ingest anything, especially data. Maybe in the second half of this fourth industrial revolution, vendors will offer portions more in line with industry appetites, so no one goes hungry because they can’t afford the full dinner.

Takeaways from Other Technologies: 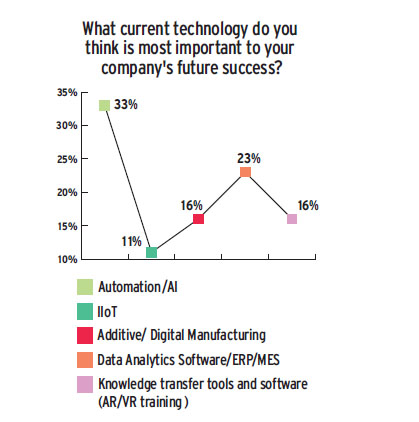 As should surprise nobody, robots and AI won “Most Likely to Succeed.”

In the last issue, we focused on robots, so I won’t belabor the benefits here, but I am interested in their impact on jobs. Of respondents who answered “automation/AI” and who also said they use robots in their operations, 54% selected “humans will adapt to new robot coworkers and jobs will increase” on the question of human/robot relations in the next five years. That’s double the people who thought “more people will be replaced than added.” One lone soul predicted the robopocalypse.

Interestingly, among respondents with positive feelings toward automation, employment increased at 59% of these companies and decreased at 20%. Overall, 54% of respondents said jobs increased and 19% indicated they had decreased.

How important is automation overall to manufacturing? The good news, if you believe robots are eyeing your job, is that only 15% of survey respondents said they are critical, while 32% said robots sustain growth but they could get by without them. Half don’t rely on them for core business functions or use them at all. Singling out SMEs, that percentage rises to 60%.

So where are these robots? They’re everywhere. The most common locations include assembly (19%), inspection (21%), pick-and-place (30%) and material handling (48%).

If I were to make one sweeping statement about wearables based solely off this survey’s data, it’s that very few manufacturers care about them. Seventy-seven percent replied they do not use wearables, and 17% of this group were part of $1 billion-plus enterprises. More than half of respondents who don’t use wearables also remarked that smartglasses did not provide any benefits and/or were a “waste of time.” 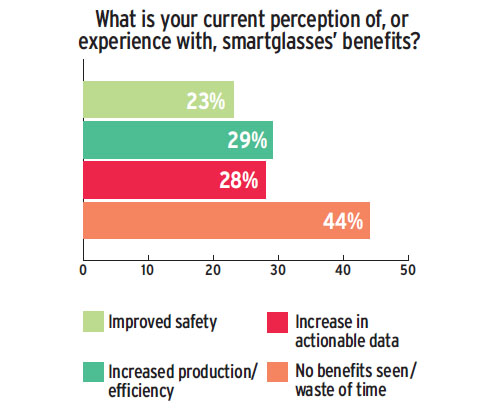 These responses are kind of crushing to me, as this is the technology I personally see as having a substantial effect on the manufacturing plant. And the benefits, regardless of platform, are evident if you ever need both of your hands for something but need to look at instructions or a smart device.

Smartglasses enable data visualization and can connect remote experts to problems thousands of miles away, while exoskeletons boost strength and prevent injury. Wearing a personal tracking device can help you monitor health and environmental safety.

Wearables also can be personal training devices, both to capture tribal knowledge and to assist new employees by guiding them through unfamiliar tasks. BMW is deploying the RealWear HMT-1 at all 347 American service centers, where technicians will use them for maintenance and repair applications.

And training is a huge deal. When asked, “What’s the biggest leadership challenge you have when dealing with implementing new technology in your plant/facility?” 30% said training employees, customers and partners to use it. 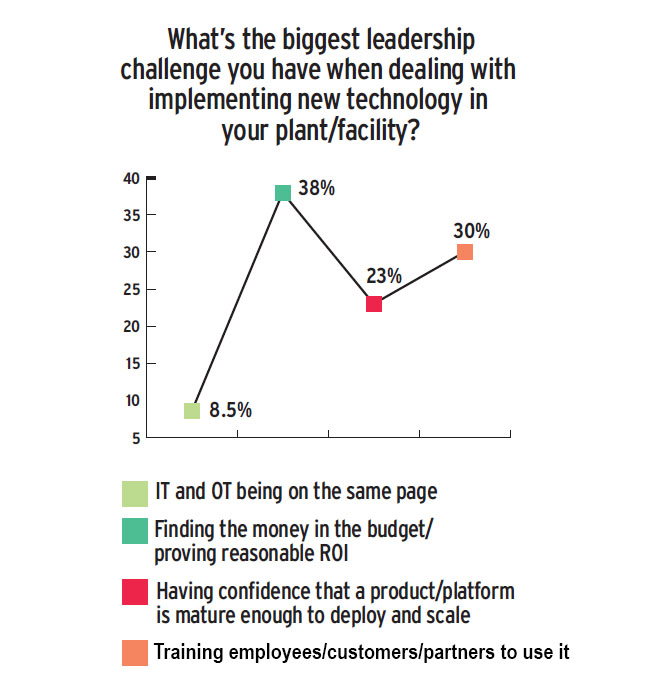 A simple augmented reality application I tried at Ford with Google Glass Enterprise Edition rendered a 3D model of the part I needed to assemble onto the monocular display, and I was able to put a suspension component together in a few seconds.

Just like with an IIoT deployment, setting up wearables takes planning, integration, cybersecurity actions and software development. Cost may still be an issue. RealWear plans to use some of its recently acquired Series B money to create a Wearable-as-a-Service model, paying monthly.

“There’s a necessity to bundle an offering and make it so bloody simple for mining companies in Argentina or Chile that want them on 1,000 employees but can’t pay for them upfront because they are running on low margins,” says RealWear CEO Andy Lowery. “We just charge $50 per person and they order 1,000 immediately. One or two uses, they start seeing ROI and pretty soon they pay for the device on the savings they have.”

It appears that smartglasses solve 68% of the tech problems leaders face today, yet many manufacturers are unaware of how these tools can help. Maybe the problem with all this new technology emerging on the scene is that there is too much: too much data, too many decisions to make, to many vendors to choose from, too many case studies to read. And there’s never enough time.

Maybe what the data really says this year is that people want simplicity. You don’t buy tech to make your life harder; it’s so you don’t have to worry as much.
It looks like Lowery has caught on.

“You want to leave them a little bit of optionality, but I’m finding out you don’t want to lead with a science fair project with these big businesses,” says Lowery. He mentioned that manufacturers don’t want 120 applications thrown at them like it’s a Cheesecake Factory menu. “It’s a much better route to market to say, ‘Here’s my recommendation, this is the whole package, this is who trains.'”

Want to join the discussion?
Feel free to contribute!

Are you looking for an IoT solution?